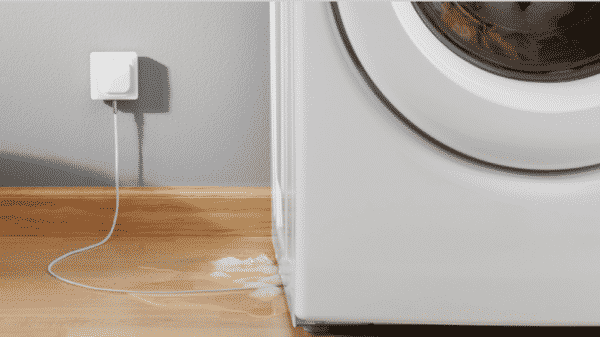 Who doesn’t like an early warning system? According to the American Insurance Association and Insurance Services Office, damage caused by water leak, such as from a burst pipe or faulty appliance, can result in thousands of dollars of unanticipated repairs.

In fact, water-related property damage exceeds $11 billion annually, with insurance claims averaging more than $7,000 per incident. Honeywell believes that your money could be better spent elsewhere – think vacation or more savings! – rather than cleaning up after a plumbing mess.

Place the WiFi Lyric Detector nearly anywhere in your home and it gives updates on humidity in the air and temperature and provides alerts if water is sensed by the four-foot cable or the contacts on the detector itself.

If there’s a problem, Lyric will tell you with an audible siren and an alert in the Lyric app. With push notifications, homeowners can set up an inner circle (from neighbors to friends and family) who also can also be notified when water is sensed.

No bigger than a hockey puck, the Lyric Detector easily sits under sinks, near appliances, close to sump pumps or any place that could have an issue with water. The included AA batteries ensure long battery life of up to three years and, once Lyric senses water, it can simply be reset to be used again. If you’re worried about a larger room, such as a basement or laundry room, one Lyric Detector can have multiple cable sensors added together for up to 500 feet of continuous coverage.

Water is great, but for those times when water isn’t so great, there’s the Lyric Wi-Fi Water Leak and Freeze Detector to keep you in the know.

Furnace Maintenance Checklist » « Why Get An Air Conditioning Tune-Up?

Along with our expert plumbing, heating and cooling services, PDM is here to support the community. Our staff is known inside and outside of work for our helpfulness. We’re trustworthy, kind, courteous and knowledgeable, and we’ll show you what it feels like to be truly cared for by your home service contractor.

Let's Work Together
Your Comfort Guaranteed!